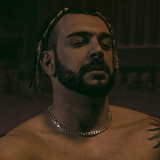 (EN) Tankurt Manas / Tankut Tan (1991 Eminönü, İstanbul) Turkish Rapper.   Tankurt Manas has started to listen and produce rap music since 12 years old. The first song is published in 2016 by himself and started to the stage performances. Since 2016, day by day Tankurt Manas continued his work without stop and participated in The Voice Turkey competition and completed fourth place. The same year, the Koleksiyon Vol. 1 (16 records) and the Koleksiyon Vol. 2 (18 records) albums are published. After a while, the Bilinç Altı album is published in 2018. Participated in many rap and music projects in diffrent styles.   Tankurt Manas is continuing to spread his name with projects like social responsibility, university summits and global brand cooperations besides music.