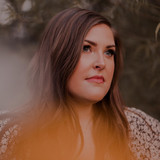 Maddie Lane is a performing singer-songwriter born in Brandon, Florida. Born into a music-loving family, she was exposed to music of all genres, instilling a love for classic rock, pop, and country from a young age. This colorful exposure has influenced a unique, bright, lyrically-driven, laid-back sound with heartfelt stories in every song she writes.  Her writing paired with her “smooth, soft” vocals creates a nostalgic, genuine sound influenced by the likes of Stevie Nicks, Kacey Musgraves, and Taylor Swift. Maddie is currently based in Nashville, Tennessee after spending a year in Los Angeles, California performing and writing. Since moving to Nashville, she has written with up-and-coming artists and songwriters, performed original music on Broadway at Moxy Nashville Downtown, and regularly plays in local songwriter’s rounds at venues such as Belcourt Taps, Alley Taps, and Live Oak.