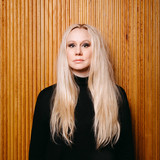 Norwegian artist Susanna is the woman behind Susanna and the Magical Orchestra // Susanna // Susanna Wallumrød, a creator of bold, original and enrapturing music, capable of building worlds to lose yourself in and collaborator with artists such as Jenny Hval and Bonnie ‘Prince’ Billy. Alongside this Susanna has also long been an interpreter of other people’s works, from AC/DC to Dolly Parton, Joy Division to Henry Purcell. Susanna has an ability to transform these works into music that sits comfortably next to her own work while never losing what made the original - and the original composer of the song - so special. 14 albums so far (by 2020) – all highly acclaimed, the most recent one ‘Baudelaire & Piano’ her first solo-album, piano and vocals only- with her interpretations of poetry by Charles Baudelaire. The album comes highly acclaimed with great reviews in The Guardian,

Financial Times, Mojo and Uncut. Susanna has won numerous awards for her music, like the Norwegian Grammy award three times and several other prizes as a singer, musician and composer.