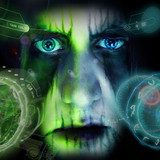 Insatiable, Insufferable, Unstoppable. The legendary chiptune warlock Rainbowdragoneyes defies gravity and destroys worlds by using old videogame consoles like the GameBoy, NES and Sega Genesis to craft his music. Since 2009 he has been touring the globe, and in 2018 released the award-winning 59-track OST for The Messenger, available on Nintendo Switch / PC / PS4 / Xbox. Some of his tracks made their way into games such as Pump It Up Prime, Just Shapes And Beats and the Rock Band Network. RDE's mild-mannered alter ego Eric W. Brown is the composer and audio designer for Sabotage Studio, drummer of Nekrogoblikon, Swashbuckle and Wizardthrone, and producer of the band Magic Hammer.