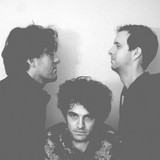 Mats Davidsen formed Wallpaper Silhouettes in the 90s and later went solo with Painted Romans. He has collaborated with others, notably Antipole and Patrick Wray. Davidsen fell in love with post-punk, new wave, goth and similar as a kid in the 80s and soon began making his own. During the heydays of 1999-2006, Wallpaper Silhouettes garnered much critical acclaim as one of the few Norwegian new wave acts at the time, but after years of live activity and two albums the band became disillusioned and fell apart. Davidsen carried on and has since released many low key and often very eclectic albums, singles and EPs. The story of Painted Romans is one of much fumbling in the dark. However, in 2020 Davidsen, unaware of the so-called post-punk revival, returned to roots with the mini-album Heart which spawned the gothic darkwave single Formation - Edit and landed a few spots on best of the year lists. By September 2020 Painted Romans had constituted as a group with Jan Ottar Nystad (previous WS member) and Thomas Sejnæs joining on synth and bass. The music can possibly be described as post-punk with heavy goth rock and darkwave leanings - rooted in punkish attitude though sometimes with a slight pop appeal.