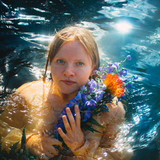 Géonne Hartman is a singer-songwriter from Utrecht (NL). With her music, she takes you on a whimsical journey through a dreamscape created by surprising melodies. Her capturing, clear voice strings together the poetic lyrics under the guidance of her band. In June 2019 she released her first EP Salt Wind produced by Eelco Topper (Falco Benz) and Arriën Molema (Room Eleven). One year later she collaborated with Tessa Rose Jackson (Someone) to record and produce her debut album. The first single of her debut album will be released in the fall of 2021. The 25-year-old singer-songwriter makes intimate, unconventional, folky indie. Her inspiration stems from strong female artists like Phoebe Bridgers, The Weather Station and Laura Marling.