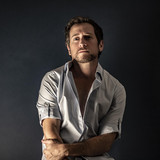 Adi Goldstein is the fourth generation in a family of musicians, the piano seemed a natural path from which to start his passion for music. From an early age, Goldstein ventured into the realm of jazz music while seeping classical influences from his mother, a pianist in her own right. From the age of seven, he studied composition and music creativity under the guidance best music teachers. As an accomplished composer. Goldstein blends melodic ideas and genres, from the simplistic approach of folk music to the complex and rich harmonies of jazz and classical music. His music has been used in numerous commercials among NINTENDO, MICROSOFT, NASA, HILLARY CLINTON, BARAK

OBAMA, trailers and has scored music for both the stage and TV/Film. --- Official website https://AdiGoldstein.com