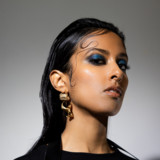 Anjulie is a Juno award-winning, platinum-selling, Canadian, Guyanese, Indian, singer/songwriter, and producer from Toronto. Anjulie has written and collaborated with Kelly Clarkson, Nicki Minaj, Lady Gaga and Natalia Lafourcade, Phyno Fino, TheFatRat, and Kshmr to name a few. Her music has been featured on HBO, ABC, NBC, and MTV, and she received an MTV Video Music Award Nomination for "BestBreakout Video of the Year".She has 2.2 million monthly listeners on Spotify with American and international fans everywhere from Baghdad to Brazil. Anjulie has sold 5 NFTs and has an artist partnership with Decentraland; the biggest metaverse on the blockchain. She has also written for both VICE and the Huffpo, is an ambassador for the Canadian Woman's Foundation and Mental Health Without Boarder, and has a weekly show featuring songwriters on clubhouse called “Behind The Song”. She just released the title track of her sophomore album “Big Bad World”. Subscribe to the mailing list for live events and performances https://linktr.ee/anjulie