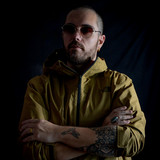 Charles F. Moreland III is an American music producer and video director living in the Annapurna Mountains of Nepal. In his past he has been a gigging jazz musician, music producer/engineer in Atlanta, touring DJ/Remix artist Bitch Please, as well as member of touring electronic bands Tryptamine, Adaboi, EP3, and more. He gave all this up for several years to work in the film/video production world as an editor and director. CFM3 then decided to leave the U.S. for Nepal and return to creating music/art full time. His production style is quite post-genre; easily existing in an amalgamation composed of ambient, lofi, trip-hop, electro-acoustic, soundtrack, downtempo, and beyond. In former pseudonymic incarnations, CFM3 has performed in support of artists including Flying Lotus, OTT, Daedalus, Nosaj Thing, Emancipator, Big Gigantic, Bluetech, EOTO, Mimosa, Panty Raid, Ooah (of The Glitch Mob), The New Deal, Shpongle, The Disco Biscuits, NastyNasty, Downlink, Eliot Lipp, as well as afterparties for Pretty Lights, Bassnectar, STS9, etc. He has also been on the lineup for Camp Bisco, Gnarnia The Festival, Counterpoint, Forecastle, Camp Barefoot, Impulse, and many more.