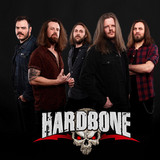 HARDBONE 110% Rock ’n’ Roll – Reduced to the maximum With until now four released studio albums and hundreds of shows of stage experience, HARDBONE has been haunting clubs and festivals on an international level for more than ten years, committing to blow the bullshit out of ear canals all over the world. Limiting themselves to the basics of old-school Hard Rock, the boys are a mighty live band, which they have proven during last year’s European tour supporting Thundermother and playing big festival shows as in Wacken, at Werner-Rennen or at Full Metal Holiday. If it is fun, rocking, smells like beer and makes you tap your feet and bang your head, then it is HARDBONE – period.