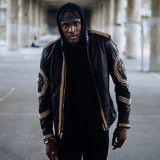 30-year-old alt-pop star Boris René found his fire for music at a young age, but sports had other plans for him. The Zaire born, Swedish bred artist started as a famed footballer for Sweden. From 2008 through 2014, Boris played in several football clubs. As a kid, Boris and his brothers would tinker with sounds and make songs. In 2013, he delivered his first song, “Alive” met with critical acclaim. From there began honing his craft, constantly bettering himself with every track. By 2016, he dropped off the monumentally successful “Put Your Love On Me,” which garnered him a certified Platinum status in Sweden and propelled him to compete in the Melodifestivalen 2016.. While he didn’t win the Swedish music competition, he did make it to the finals. His other cut “Her Kiss” carried him to the end of 2017. The stage is now set for Boris René to travel to new territories with his sound. As he experiments with the boundaries of Pop music, he brings a fresh new take to the genre, complete with an intoxicating voice. His next single “Give It To Me” will be the next offering to the International market for 2018. While most struggle to find their talent in one field, Boris René has his feet in many. From being a renowned footballer to now a music star on the rise, there isn’t much this bright young artist can’t do. If you’re familiar with his fancy footwork, it’s time to tune into his music next.