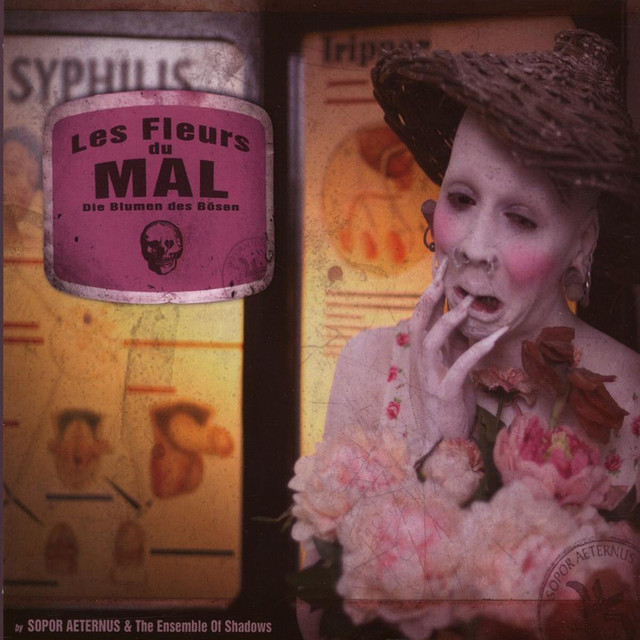 1989 marks the founding of that deepest of dark bands, Sopor Aeternus (Eternal Sleep, or Sleep of Death). It began when the two musicians known as Varney and Holger met in a Frankfurt, Germany goth club. With no money to buy instruments, they had to compose their music completely in their heads. Nevertheless, they released a triad of lyrically intense yet technically flawed demo cassettes (Es Reiten Die Toten so Schnell, Rufus, and 'Till Time and Times Are Done) in 1992. After that, Holger left the band and the newly formed label Apocalyptic Visions developed an interest in Varney's music. In 1994, a debut CD with the extensive title Ich Tote Mich Jedesmal Aufs Neue, Doch Bin Ich Unsterblich Und Erstehe Wieder Auf In Einer Vision des Untergangs, or Ich Tote Mich... for short, was released as a limited edition. Songs like "Tanz der Grausamkeit" and "Do You Know My Name" were quickly discovered and became underground cult hits, taking the album into two re-releases. Continuing as the sole human performer in Sopor Aeternus, Varney also credits the Ensemble of Shadows for her inspirations. These are spirits, beings who she says she receives the musical compositions from. She also works through depression with the aid of her music, as can be heard on the demos, produced at a time when she was gravely ill and at risk of losing her eyesight. She describes her subsequent works as "introverted exhibitionism." They are also expressions of extreme, intense pain. Varney's second album, Todeswunsch ­ Sous le Soleil de Saturne ("Deathwish ­ Under the Sun of Saturn") a 1995 release, was a curious combination. While musically it seems perhaps a bit gentler and less depressive, its lyrics were so painfully evocative that she said she found herself weeping while recording some of the songs. The theme? "Suicide, sweet suicide." The Ensemble of Shadows dissuaded Varney from committing suicide, and in 1997, as she dealt with issues of her transexuality, she expanded her name to Anna-Varney. She has expressed in interviews the feeling that her album Inexperienced Spiral Traveller, from 1997, is her "worst" release, despite its sales success. Voyager ­ the Jugglers of Jusa followed in 1998. The song "Feralia Genitalia ­ Arrival of the Jugglers" shows a gender operation theme. Yet perhaps the most unusual song is a cover version of Kraftwerk's "Das Modell" which she translates into Latin and plays on a baroque harpsichord. 1999 brought the release of Dead Lover's Sarabande (Face One). It is steeped in the pain of inevitable loss and death. Dedicated "to 1334," it commemorates the suicide of former Christian Death member Rozz Williams on April 1, 1998. Anna-Varney and he had developed a friendship through letter writing and had thought about a collaboration, which sadly, was never to be. As is characteristic of her deliberately mysterious approach, she steadfastly declines to explain the lyrics of this slow, grieving, dark production. Then, in March 2000, came the companion volume, Dead Lover's Sarabande (Face Two), with more of Anna-Varney's catacomb deep, stygian intensity. ~ Murrday Fisher, Rovi