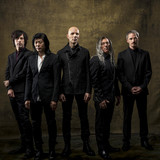 American rock supergroup A Perfect Circle was formed in the late '90s by Tool vocalist Maynard James Keenan and former Tool guitar tech Billy Howerdel. On their debut, Mer de Noms, A Perfect Circle were seen as an extension of the alt-metal-fused-with-art-rock style popularized by Tool in the early to mid-'90s. Despite comparisons, however, A Perfect Circle quickly developed into its own entity, focusing on lighter and more melodic sounds that were combined with a theatrical, ambient quality incorporating occasional strings and unconventional instrumentation on later albums like Thirteenth Step and Eat the Elephant. Over the decades, members of Nine Inch Nails, Marilyn Manson, Smashing Pumpkins, and Queens of the Stone Age have played a role in the band's revolving lineup under the core songwriting duo of Keenan and Howerdel. After the release of Ænima in 1996, Tool found themselves in the midst of an extended legal battle with former label Freeworld Entertainment. When the dust settled two years later, the band reached a 50-50 joint venture agreement for future recordings and, feeling a little burned out, decided to take some time off. It was at this point that Keenan joined up with Howerdel and Paz Lenchantin to form A Perfect Circle. Keenan had met Howerdel in 1992 when Tool opened for Fishbone. Howerdel had been Fishbone's tech at the time and he played Keenan a few of his songs. Keenan was impressed and the two talked of collaborating in the future. However, the opportunity wouldn't present itself until the end of the decade. With Keenan on vocals, Howerdel on guitar, and Lenchantin on bass, the trio recruited ex-Failure and Enemy member Troy Van Leeuwen on guitar and ex-Vandals and Guns N' Roses member Josh Freese on drums. The quintet rehearsed together but didn't announce the formation of a new band until performing for the first time on August 15, 1999, at a benefit concert at the Viper Room in Los Angeles. Howerdel, who had been composing songs for years, as well as working with bands such as the Smashing Pumpkins and Nine Inch Nails, became the band's chief songwriter and producer. A Perfect Circle released their debut album, Mer de Noms, in 2000. Featuring the hit singles "Judith" and "3 Libras," Mer de Noms debuted in the Top Five of the Billboard 200 and eventually went platinum. The band opened Nine Inch Nails' Fragility Tour in 2000, but soon attracted their own headlining audience. The band took a short break between albums, allowing Keenan to hop back to Tool for the release and promotion of 2001's Lateralus. In the meantime, preparation for A Perfect Circle's sophomore effort continued. Lenchantin and Van Leeuwen -- both involved with other projects at the time -- were swapped out for Jeordie White (Marilyn Manson) and Danny Lohner (Nine Inch Nails), respectively. Keenan returned to the fold in early 2003. Months later, Thirteenth Step arrived, debuting at number two on the Billboard 200. Moodier and more expansive, the set included Top Five rock chart singles "Weak and Powerless" and "The Outsider." Lohner made way for James Iha (Smashing Pumpkins) as the band embarked on an international tour. Concluding the trek, A Perfect Circle issued the covers album eMOTIVe in 2004. The politically charged, anti-war collection featured interpretations of songs like John Lennon's "Imagine," Marvin Gaye's "What's Going On," and Depeche Mode's "People Are People." The album was also notable for the inclusion of new track "Counting Bodies Like Sheep to the Rhythm of the War Drum" and "Passive," a holy grail for fans written by Keenan, Howerdel, Lohner, and Trent Reznor for their scrapped Tapeworm project. Shortly after the release of eMOTIVe's companion DVD set aMOTION -- which bundled the band's music videos along with a remix CD -- A Perfect Circle went on a hiatus that would last over a decade. During their downtime, Keenan recorded albums with Tool and his solo project, Puscifer, while Howerdel started a new band, Ashes Divide. While rumors of the band writing songs cropped up now and again, A Perfect Circle returned (to the stage, at least) in 2010, and released a new song, "By and Down," on their 2013 greatest-hits compilation Three Sixty. However, it would be another half-decade before an official return. In late 2017, the group reunited for a tour of the United States, teasing fans with the possibility of a trek to the studio. They issued the single "The Doomed," their first new song in over a decade. "Disillusioned" and "TalkTalk" followed in early 2018. That April, A Perfect Circle released their fourth LP, Eat the Elephant, with another revamped lineup that added Matt McJunkins (Eagles of Death Metal) and Jeff Friedl (Puscifer) to the Keenan/Howerdel/Iha trio. As political as eMOTIVe and even more melodic than Thirteenth Step, Eat the Elephant also marked the first time the band recruited an outside producer; namely, Dave Sardy. ~ Neil Z. Yeung & Tracy Frey, Rovi