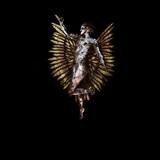 Anna Mitchell’s reveals the release of her self titled second album in Ireland in January 2018. ‘Anna Mitchell’, the album, intertwines fragility and power, it is a record made with confidence, intuition and empathy, assuredly alternating between sparse, atmospheric grooves and slightly gnarled, expansively lovely distorted grungy folk, rock. The album was recorded independently in Cork, Ireland under the watchful eye of engineer and co producer Brendan Fennessy (O Emperor) along with a band of well known Irish musicians including drummer Davie Ryan (Jack O’ Rourke, Notify), Brian Hassett on bass (John Blek & The Rats, Mick Flannery) and Alan Comerford on guitar (O Emperor, Mick Flannery). The initial blustery rock ‘n’ roll impact only adds to the albums spectrum with the seasoned band capable of swooning and swaying throughout dreamlike soundscapes and hypnotic grooves. A large chunk of this recording was written while Anna was based in based in Woodstock recording a live album with Simone Felice and The Felice Brothers and you can certainly hear the spirits of upstate New York haunting the album. <br>