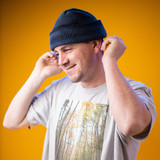 I'm a lyricist and producer from the woods creating hip-hop from the heart to uplift and inspire listeners around the world.   I have independently released over 100 songs, including LPs, EPs, singles and features, while touring extensively, both solo and with a live band.   I was born and raised in Berkshire County, on the western edge of Massachusetts. There were very few examples of hip-hop artists from my rural hometown, but the music made its way into my life when I found CDs that belonged my older brother. Inspired at age 11 by The Score by Fugees, Illmatic by Nas, and other late 90s hip-hop, I forged a path not previously traveled by any white kid from The Berkshires.   When I discovered the power of hip-hop, things were turbulent at home, at school and in the world. I was waking up to issues of race, class, politics, human rights and climate change. My music became the vehicle for addressing injustices and inspiring people.   Now based in the Berkshires, my music production studio is located in Housatonic, MA. My latest full-length album, From the Woods, was released on January 29th, 2021. Following the album release, I dropped a remix to “From the Woods” featuring hip-hop legend and icon KRS-One. I remain dedicated to creating hip-hop from the heart to uplift and inspire listeners around the world.