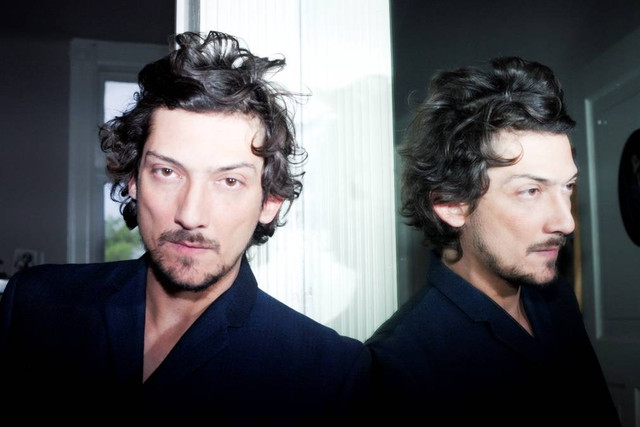 With an airy falsetto that emerges effortlessly from his richly expressive tenor voice, León Larregui is best known as the charismatic frontman and guitarist for Latin Grammy Award-winning Mexican neo psych-rock veterans Zoé. He is also a charting solo artist and noted collaborator who has worked with many top-flight Latin artists including Enrique Bunbury, Natalia LaFourcade, Carla Morrison, and Mon Laferte, to name a few. His diverse writing style melds sophisticated pop melodies with Latin and rock rhythms and juxtaposes organic instruments with electronic ones. He and Morrison cut the single "Mensajero," which became a regional hit at U.S. indie rock radio. He also cut a pair of duets with LaFourcade including "Rue Vieille Du Temple." In 2015, he appeared with Bunbury during the latter's MTV Unplugged episode. Larregui was born in Cuernavaca to a Mexican father and Italian mother. Given his father's job, the family moved around quite a bit. First it was to Mexico City then Torreon, then back to Cuernavaca for high school, where he learned to play guitar. He attended university at Mexico City's National School of Painting, Sculpture and Engraving and got his degree in plastic arts and animation. It was there that he met future Zoé guitarist Sergio Acosta, also originally from Cuernavaca. Larregui worked for a time as a graphic animator in cinema with some success but times were lean. With his photogenic good looks he got a gig with Armani as a fashion model to pay the bills. In 1995, during his modeling and acting career, he appeared in the lead role in Shakira's hit video for "Se Quiere, Se Mata." In 1997, after attending a concert together, Larregui and Acosta formed Zoé with Jesús Báez (keyboards) and Ángel Mosqueda (bass). Drummer Rodrigo Guardiola joined later. The band's road to success took some time. Early on, though they were signed to Sony, the music business was too frustrating for them and they split up for a short time. The band worked on film scores and serial music for commercials to make ends meet. They got their break in late 2005 with an independently released EP for Noiselab. Titled The Room, it went gold. Their first album for the label, 2006's Memo Rex Commander y el Corazón Atómico de la Vía Láctea, entered the Mexican charts at number one and subsequently went gold. They issued two more albums for the label, both hits, and signed to EMI for 2009's Reptilectric Revisitado. The period of activity from 2005-2011 was intense: The band toured almost constantly, released a series of self-made videos, and did film and recording work. After issuing the soundtrack to their Música de Fondo: MTV Unplugged in 2011, Larregui told the band he needed a break. In August of 2012 EMI released his debut solo album, Solstis. It entered the Mexican charts inside the Top 10 and was eventually certified first gold, then double platinum, thanks in no small part to the success of its second single, "Brillas." After a short tour, Larregui returned to Zoé for 2013's Prográmaton. As a solo artist, he had the band's full support, as the songs he wrote for himself were completely different from the band's music. Larregui continued to record and tour with Zoé, but also undertook tours with Bunbury and others; he did side work on other artists' recordings, too. In 2016, Larregui issued his sophomore solo LP, Voluma, through Universal. Employing styles as diverse as cumbia and ranchera, bossa nova, classic rock, and electronica, it landed inside the Top 10 on the Latin pop charts, and became a charting streaming and download entry, too. He followed it later in the year with the EMI-released remix set, Volumixes, and in 2017 with the charting live album Metropolis, while continuing his role as frontman for Zoé. ~ James Christopher Monger & Marcy Donelson, Rovi