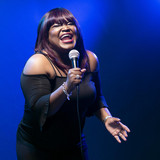 With a recording career that began in 1998 at age 18, award-winning vocalist Shemekia Copeland has grown to become one of the most talented and passionately candid artists on today’s roots music scene. Her riveting new album, Uncivil War, builds on the musically and lyrically adventurous territory she’s been exploring for over a decade, blending blues, R&B and Americana into a sound that is now hers alone. The soulful and uncompromising Uncivil War tackles the problems of contemporary American life head on, with nuance, understanding, and a demand for change. It also brings Copeland’s fiercely independent, sultry R&B fire to songs more personal than political. The album is far-reaching, soul-searching and timeless. When Shemekia first broke on the scene with her jaw-dropping Alligator Records debut CD Turn The Heat Up, she instantly became a blues and R&B force to be reckoned with. With each subsequent release -- Uncivil War is her ninth album -- Copeland’s music has evolved. She continues to broaden her musical vision, melding blues with more rootsy, Americana sounds, and singing about the world around her.

Her 2018 album, America’s Child, featuring a duet with John Prine and accompaniment from Mary Gauthier and Rhiannon Giddens, was named by MOJO magazine as the #1 blues release of the year. In addition to her three Grammy nominations, Copeland has won a total of 12 Blues Music Awards and over 20 Living Blues Awards. Copeland hosts her own daily radio show on SiriusXM.