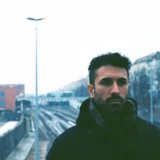 Sidus is a Berlin based post-rock instrumental one-man band formed by bass player Spyros Olivotos. After a period of experimentation and pre-production, Sidus hit the studio in 2019 to record his first E.P. with the title “Seasons Reversed”, an instrumental, cinematic, post-rock, metal collection of five compositions, influenced by God is an Astronaut and Explosions In the Sky but also Deftones and Hans Zimmer. ‘Seasons Reversed’ was released during November 2020, followed by a second EP with a collection of acoustically re-imagined songs from the debut EP (Envy, Stellar Sky and Prototypes/Replicas).   Sidus returns with his new single ‘Dark Flames’, which is raising awareness about the devastating conflagrations that took place across many countries in the Mediterranean region during August 2021. Nature, human and animal life faced serious threats caused by extended wildfires. This song is a call to action to all of us. Even if this burning nightmare is now in the past, the issues of climate change are still ongoing and they will keep affecting us and our home planet until we decide to consciously change our behaviour. There is still time to prevent the future ‘Dark Flames’ that will certainly come.