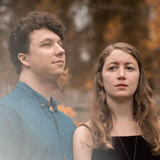 Honeysuckle is a progressive folk act that blends older influences and traditional instrumentation with modern effects and inspiration. Comprised of Holly McGarry and Chris Bloniarz, this Boston based band can frequently be found performing across the country. Honeysuckle has performed at Newport Folk Festival, Lollapalooza, Mountain Jam, Americanafest, Otis Mountain Get Down, and Audiotree. Awards include Americana Artist of the Year (2019) and Folk Artist of the Year (2018) at the Boston Music Awards, in addition to having been nominated every year since 2016.