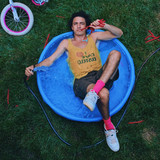 Born and raised in Buffalo, NY, chart-topping singer/songwriter Marc Scibilia’s been on a steady rise ever since the 2012 release of his breakout single, “How Bad We Need Each Other.” His music has been featured in a slew of film and television soundtracks, including a recent Water.org PSA narrated by Matt Damon; and toured with James Bay, Zac Brown Band, Butch Walker, and Nick Jonas, among others. Scibilia was forced to put his burgeoning career on hold for the better part of 2019, though, when he welcomed his first child into the world while simultaneously caring for his ailing father, who would tragically pass away from brain cancer shortly thereafter. He chronicles the profound, emotional journey on his riveting new album, ‘Seed Of Joy,’ which he recorded alone in his basement studio in Nashville in the midst of the COVID-19 pandemic. While you might expect the finished product to be a dark and somber affair, ‘Seed Of Joy’ is, true to its name, just the opposite, fueled by soulful vocals and soaring melodies and overflowing with rich, anthemic exuberance at nearly every turn. Calling to mind everything from Paul Simon and Cat Stevens to Bleachers and Vampire Weekend, the result is a powerful slice of self-reflection that balances nostalgia and optimism in equal measure, a thoughtful, defiantly optimistic work that insists on finding silver linings, even in the face of gut-wrenching loss. The new album, Seed of Joy, is out now.