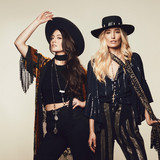 The Sisterhood Band is poised to release their Sony Music Nashville debut, Summer Setlist, a collection of lilting, reflective, authentic, and affirming songs about life and living it beyond rules and expectations. Alyssa Bonagura and Ruby Stewart have a strong musical pedigree. Bonagura is the daughter of Kathie Baillie and Michael Bonagura (the core of ‘80s country band Baillie & The Boys) and Stewart’s father is rock icon Rod Stewart. Raised on the road with an obsessive passion for music, Stewart and Bonagura found kindred spirits in each other and their shared devotion to folk legend Joni Mitchell. Abandoning burgeoning solo careers, they bonded as songwriters and created a distinct, compelling sound as The Sisterhood Band. Their debut, which was produced by the duo, is a lush reflection of their live show. This summer, The Sisterhood Band will open for Steven Tyler and The Loving Mary Band’s international tour with a dozen dates in the U.S., Italy, Spain, and the U.K.