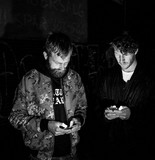 The key members in War Drums is Carsten Hebsgaard and Thomas Kring, who write and create the music and the visual expressions of War Drums. The Musical process is immediate and limited to the equipment which is available. So far no guitars have been used, but that doesn't make them a synth band. Not at all.   All members have been playing in guitar driven post-rock bands and needed to remove the instrument, at least for a while, so that they wouldn't write the same kind of songs as they'd been doing for the last 10 years. Carsten took the bold jump from guitar to lead vocals, after being a guitarist his whole life, but sometimes you need to kick yourself in your sedation and walk the line.   The music is inspired by the raw emotions and nerve from the punk-scene, without War Drums being an actual punk-band. They see themselves thrive on the pulse and nerve from the punk scene. The aim is to hit that primal feeling within themselves, the feeling that makes them feel like they're free but at the same time trapped in the void between music and reality.   Live the music is transformed to a more simple and raw expression, which gives the music a second dimension. "It has a beat that makes you want to jump a long, a vocal that you wanna sing along to and a nerve that makes you want to light a cigarette, and put on your best bad-ass look" - Sound Of Aarhus