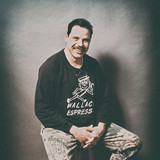 Bahamas is the intimate, lyrically wry, indie-folk solo project of Canadian guitarist and singer/songwriter Afie Jurvanen. Having honed his skills working alongside artsy roots luminaries like Feist and Jason Collett in the mid-2000s, Jurvanen garnered widespread critical acclaim for his 2009 Bahamas debut Pink Strat. He has continued to expand his approach, dipping into organic '70s-style soul, jazz, and country influences; sounds that helped earn him Juno Awards for 2014's Bahamas Is Afie and 2018's Earthtones. Born in 1981, Jurvanen grew up in Barrie, Ontario with his mother, a social worker. He eventually picked up the guitar and by his teens was playing in local bands. At age 21, he moved to Toronto where he built his reputation strumming with rootsy indie artists like Feist and Jason Collett. In 2009, he made his solo debut as Bahamas with Pink Strat. Recorded in a rural house north of Toronto, the album garnered critical acclaim, including picking up a Juno Award nomination for Roots & Traditional Album of the Year – Solo. On the heels of the album's release, Jurvanen toured in support of alt-country icons Wilco before headlining his own tour. More session work followed, including projects with Hayden and Doug Paisley. Jurvanen also continued his association with Feist and helped launch the career of fellow Barrie natives Zeus, bringing them on board as Collett's backing band. In 2012, the guitarist returned with his follow-up album, Barchords, which hit number 14 on Billboard's Heatseekers chart. It also earned him two more Juno Award nominations, including Adult Alternative Album of the Year and Songwriter of the Year for the tracks "Be My Witness," "Caught Me Thinking," and "Lost in the Light." Also in 2012, he contributed to Kathleen Edwards' Polaris Music Prize shortlist-nominated album Voyageur. Jurvanen's third studio album, Bahamas Is Afie, arrived in 2014 and featured a '70s-influenced soft country vibe. It climbed to number four on Canada's album chart and peaked at number six on Billboard's Americana/Folk Albums chart. Long-listed for the Polaris Music Prize, the album also won Jurvanen the Juno Award for Adult Alternative Album of the Year and Songwriter of the Year for "All the Time," "Bitter Memories," and "Stronger Than That." After more intercontinental touring, he re-emerged in early 2018 with Earthtones. Emphasizing a funkier, smooth soul sound, the album found him collaborating with the all-star rhythm section of bassist Pino Palladino and drummer James Gadson. It took home the Juno Award for Adult Alternative Album of the Year. In September 2020, he returned with the equally soul-influenced Sad Hunk. ~ Matt Collar, Rovi