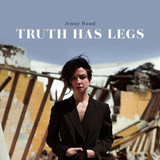 With the voice of a siren, self-taught guitarist and singer-songwriter Jenny Wood has captivated audiences throughout the country redefining alternative pop-rock with her moving lyrics, authenticity, alternate tunings and desperate, potent melodies. With a background in theater and vocal performance at Wichita State University, Jenny learned to perform while studying composition and songwriting to be able to tote her one-woman show cross-country and earn notoriety as being a truly genuine artist. She lived in southern California and Nashville for much of her early twenties writing, performing and touring with all genres to earn her indie artist title. Jenny recently created her own anti-bullying music program that evolved from her music video, “Don’t Let Them Get In Your Head” and now tours local schools with her music concert that encourages kids to take the negative and make it creative. Her first full length release, “Don’t Let Them Get In Your Head” (2015) is available on all digital distribution sites and her newest EP, “Truth Has Legs” was released in September 2018. Jenny continues to play her with her original rock band that harkens 90’s grunge and ripping vocals as well as shoegaze project Team Tremolo and various funk/R&B groups. Jenny’s loyal fanbase cares deeply for her commitment to honest lyrics and self-truth, and youth inspired by her will to share one’s gift to better connect and contribute to the world.