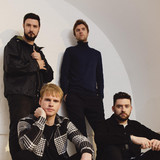 Dublin, Ireland-based modern rock quartet Kodaline specialize in soaring, radio-ready guitar rock that's drawn comparisons to Coldplay, Keane, U2, and Oasis. Formed in the working-class town of Swords around the talents of Steve Garrigan, Vinnie May, Jr., Jason Boland, and Mark Prendergast, the band released an eponymous EP in 2012, with plans to unleash a full-length outing the following year. At the end of 2012, the band was shortlisted for the BBC's Sound of 2013, but was beat to the top spot by Haim. Kodaline released their debut album, In a Perfect World, in June 2013, which was preceded by the singles High Hopes and Love Like This. The album was a major success in Ireland, going platinum twice, and it also did well in Britain (it peaked at three and went gold) as well as portions of Europe. Kodaline's second album, Coming Up for Air, followed in early 2015. The album peaked at number four on the U.K. charts and spawned the singles "The One" and "Honest." In the summer of 2017, the band returned with the single "Brother."