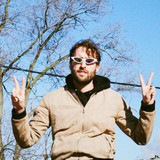 An interstellar funk champion, Freddy Todd has no time to waste in this galaxy. Born & raised in Detroit, he found his way into the matrix at age 14, slowly understanding the intricacies of glitch found within Windows XP. After being bestowed a keytar from his main homie at 22, he has continued to shred not only the minds of his fans but the evil vibes throughout the world. Freddy Todd is a glitch funk hyper throw down for the people, and something to be witnessed and enjoyed at full volume. 2021 will have Freddy Todd leaving no brain un-melted.