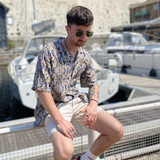 Pop and R&B vocalist, DEAN KNILL, brings emotional imagery and heartfelt story-telling to the world of songwriting. Taking inspiration from a wide range of artists including Ed Sheeran, Bruno Mars, RAYE, Harry Styles, and Tate McRae. Dean's music has been described as "weighty, meaningful and contagiously catchy", drawing similarities to songwriter Ed Drewett and artists such as Zak Abel.

By pairing his quirky concepts and heartfelt lyrics with his raw, soulful vocals and powerful British accent. Dean has formed a fresh and distinctive take on Pop music. Born in Shoreham By-Sea, Dean has been performing on the south coast for well over a decade. In March 2020 he started releasing his original music to the world, accumulating over 15,000 streams on Spotify alone and receiving air play on Londons 'Flex FM' and 'Amazing Radio', Brighton's 'Platform B' and featured in multiple press releases, all that from just two singles!! Dean is very much in tune with his fan base on all social platforms, so get involved! 'Butterflies & Warning Signs' - "I think it is such a riveting message, the idea of recognising the warning signs but continuing to pursue a romantic relationship anyway, it's like the beforehand of a tragedy that is anxiety-induced, but so compelling." Debut single ‘I Loved You More’ is about exactly that, being more in love with your partner than they ever were with you. "I WRITE ABOUT HOW PEOPLE MAKE ME FEEL, SO THERE'S A CHANCE SOMETHING IS COMING ABOUT YOU!"