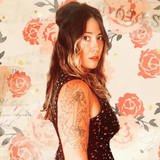 Hannah Juanita was born and raised in Chattanooga, TN, and brought up on country music. In 2017, weary from rambling for years, she found herself in a cabin on the side of a mountain in WA state, lonely and stuck in a relationship that had her feeling miserable. Angry and sad a lot of the time, she started writing country songs, and when she left that man and that mountain, she headed back to the south. Having left everything but her dog behind, she threw herself into writing and is ready to release her first full length record in early 2020. Rooted in traditional country, Hannah’s writing is refreshing and authentic amidst so many attempting to emanate southern culture through song. Her emotion and intensity are echoed in the rich tone of her voice, reminiscent of the sass and vibrato of Loretta Lynn. Like Loretta's song, Hannah is a honky tonk girl, out two-steppin' most nights to the cries of the steel guitar, so she naturally understands the groove of a song that makes a dancer reach for their partner's hand and hit the floor. The content of her music, often consisting of love, heartache and revenge, is just as relatable and timeless, as her melodies are alluring and memorable. Basically, Hannah Juanita tells it how she sees it and seems to have no problems finding the words to make you laugh, cry, regret the things you did or wish you’d done the things you should’ve… like a clever and metaphorical punch in the gut you didn’t see coming, but know you deserved.