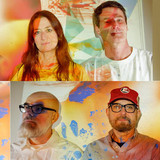 Away Forward began when the members formulated a plan to start a Shoegaze/Dreampop project at a show in a club in Toronto. Andrew McAllister (Guitars,Vocals), Greg Chambers (Bass), Paul Boddum (Drums) and Lisa Nighswander (Vocals) have played in bands in Toronto since the 90s. The members first met when their bands shared a rehearsal space in an old WW1 munitions factory in the Liberty Village area of Toronto. Lisa and Greg in the band Mean Red Spiders, the preeminent Shoegaze band in Toronto at the time, and Andrew and Paul from the post-punk powerhouse, Neck/Christiana. Both bands were signed to Teenage USA and released several albums on the label through the late 90s and early 2000s. Both bands toured, MRS made a few tours to the US and across Canada. As the new millennium progressed, both bands would go through changes and in the end, break-up, with various members forming new groups. At a Swirlies show at the Drake Hotel in Toronto, Greg, Paul and Andrew decided the time was right for them to get serious about their love of all things Shoegaze and form a band committed to bringing that vision to the public. The result was the 2018 debut, “Away Forward”, establishing the bands quality of song writing and critical praise. The bands sophomore release, “Catching the Sun” continues the lush, concisely structure songs with Lisa’s immaculate vocals. Recorded at an old log cabin farm on the Bruce Peninsula, “Catching the Sun” was mixed and produced by Greg Chambers.