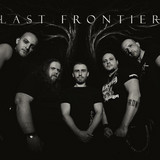 Last Frontier is an Atmospheric Heavy Metal Band from Italy. 2005: The band, initially known as "Trascendence", changed their name to Last Frontier with the first demo 2006-2009: During this period two Demos saw the light (‘Darklight’, 2007 and ‘Black Horizon’, 2008), supported by an intense live activity who earned appreciation both from a Metal and non-Metal audience. 2010: The year of the aggressive and experimental ‘Apocalypse Machine’, L.F.’s first Full-length, self-produced and subsequently physically re-edited by the German label 'MDD Records' and digitally by 'iMusician'. 2011-2013: Many Gigs while writing new material. 2014: ‘"Theta Healing" is released, the second Full-Length. Less experimental and more appealing, with a more professional recording. Printed and distributed marking the beginning of the collaboration with "Revalve Records". 2015-2017: These years have seen L.F. taking over a lot of different cities throughout Italy, setting stages on fire together with many Italian and foreign Metal Icons. 2018-2019: The band has temporarily suspending all the activities, searching for the right concentration on the realization of the third album. Meanwhile it is enlisted in the ranks of the new singer Marco Cantoni (Cyrax, ShiversAddiction). In June of 2019 "Aether (Equivalent Exchange)" , the third disc is finished. 2020: Aether (Equivalent Exchange) It will be published and distributed at the beginning of the year with more 'Revalve Records'.