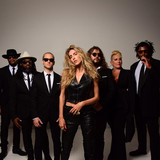 Miss Velvet and the Blue Wolf

throughout the debut album, inspired by the jaw-dropping vocals of front woman Miss Velvet.