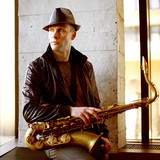 Chris Reinhardt has performed with multi-platinum Grammy winner and acclaimed vocalist Alicia Keys. His single "Stay Close" hit the Top 10 of the Jazz Adds Radio Charts (US) in late 2017. The track exclusively was powered by the JazzTimes Magazine. Influenced by his own blend of jazz, with a touch of soul and r&b, Chris brings his fresh, elegant sax grooves to create his own twist on the contemporary jazz genre. After the introducing 2011 appearance as a semi-finalist of the ISC International Songwriting Competition in the jazz category (Nashville, TN.) alongside competition winner and celebrated artist Gregory Porter, he has been in the studio crafting his solo debut album. Titled "Inside Identity" the story deals with the following tagline: a reflection on the cycles of love. The record features a variety of international guest appearances such as German pianist Felix Dubiel and American keyboardist Jesse Fischer. Produced by label head Astral22, the first single release "Mind Evolution" featuring jazz/soul vocalist Rogiérs (former keyboardist & background singer of Alicia Keys), entered the Top 50 in the Smooth Jazz Now Charts (US) for 16 weeks throughout 2013. Additionally the album opening track "Drift" reached the Top 10 on the Groove Wave Radio Charts (Brazil) for four weeks in 2014. To catch Chris live on stage, watch out for the beautiful duo lineup feat. pianist Felix Dubiel or join one of their soulful trio/quartet concerts.