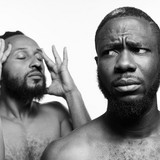 Cocky creatives FOKN Bois, aka M3NSA and Wanlov the Kubolor, who gave the world the first Pidgen Musical, “Coz Ov Moni” (Because Of Money) and it’s sequel “FOKN Revenge”, are the most celebrated band in the world due to their most unconventional way of entertaining with ingeniously tasteful shock lyrics, revolutionary performance art, & indulgent progressive sonics.   Though both excellent lyricists, M3NSA leans more towards music production and Wanlov the Kubolor is more into visualisations. Their live setup boasts of an additional member Andras Weil who plays keys and directs the live performances.   FOKN Bois never saw themselves doing Afropop because of it’s generally lovey dovey subject matter and controversial name but here they are. We are laughing with them on their new 7-Track EP “Afrobeats LOL”.   “Our new EP is a collaboration with the emergent Hiplife scene like Mr Eazi, Medikal, Sister Deborah, Dex Kwasi and also high-life icon Gyedu Blay Ambolley”   FOKN Bois are often inadequately compared to duos like Outkast, Flight of the Conchords and Run The Jewels, but many now know to expect anything and everything more from this raw, witty braggadocious and eccentric band. This is not an African thing...Just do the FOKN thing!