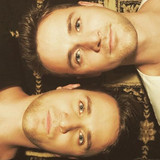 The Royce Twins are Gabriel and Michael Saalfield, singer-songwriters and multi-instrumentalists from Melbourne, Australia. The Royce Twins EP - their crowd funded debut, peaked at number 20 on the Independent Singles Chart published by the Australian Independent Record Labels Association. Their cover of “I wont give up” also appeared in the top 40 Aria Charts. The Twins song Fly made it to the semi-finals of the hotly contested Pop/Top 40 category in the International Songwriting Competition 2014. Their song Heartstrings made it to the semi-finals in the Singer-Songwriter/Folk Category of the International Songwriting Competition in 2015. Both of these tracks appear on their Debut EP. It’s an exciting outcome for any singer-songwriters to receive this kind of attention from a first release. The Twins were back in the recording studio in 2017 and their epic new EP called 4 Years is live on Spotify. It features Picture Perfect, Shade of the Moon, Falling, 4 Years Ago and Nightmare. Their songs Picture Perfect and Falling also made it to the semi-finals of the International Songwriting Competition in 2018 and 2019 respectively which is an awesome achievement. The Twins have a hot new rock single coming in 2020. Connect with the Twins below: Website https://theroycetwins.com.au Facebook https://www.facebook.com/theroycetwins Instagram https://www.instagram.com/the_royce_twins/ Wikipedia https://en.wikipedia.org/wiki/The_Royce_Twins