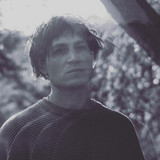 CJ Mirra is a musician / sound artist based in the UK and has become known as 'the composer for cold water surf films’ after scoring over 20 films by Chris McClean, a partnership that toured an award-winning live audio/visual performances world-wide. He is BIFA nominated for 'best film sound' for Time Trial and has composed and created sound design for a number of other

feature and short films as well as worked in the studio with artists such as Mount Kimbie.