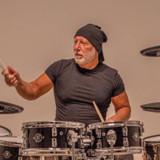 Born in 21 January 1960, i'm an American hard rock and heavy metal drummer. My first professional work was in 1984 with the MCA band "Hanover Fist" from Toronto in Canada, after which i recorded and toured with other bands, playing many styles of music in western New York state. Between 1987 and 1997 i worked with various virtuoso guitarists, including Yngwie Malmsteen, Tony Macalpine, and Steve Lukather, and bands like Kuni and Beau Nasty. In 1997, I moved to Europe, first in the Netherlands for six months and then Germany where i work with bands and artists such as Rage, Gamma Ray, Savage Circus, Axel Rudi Pell, Roland Grapow, and Masterplan. In 2016 I joined Italian heavy metal band Vision Divine. In 2017 I also joined Avalanch and Kreyson. In addition, I had my own three-piece band, the Terrana, and a live musical project that combines classical and rock music with operatic vocals, titled "Beauty of the Beat", that I launched while working with Finnish singer Tarja Turunen.