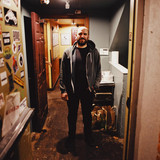 In the spring of 2017, after 11 years of performing and recording under his own name, David Bazan's growing fatigue with working alone hit a tipping point. "I missed the energy of making music with other people on stage and constantly traveling alone was starting to really sting", Bazan recalls. "I needed to be in a band again". At that point, assuming this new band would be billed as "David Bazan Band" or similar, he began to set the wheels in motion to make it happen. He rented a rehearsal space again, hired a couple buddies for upcoming tours, and started fleshing out demos for the band to cue off of. He didn't realize it at first, but by mid-summer something big started to dawn on him: he had stumbled back into the very same process that yielded the first three Pedro the Lion records. "To my surprise, it felt a bit like coming home." The band’s new album and Polyvinyl debut, Phoenix, marks a return to form for the beloved group, while mapping out the emotional intricacies and childhood experiences of growing up in Phoenix, AZ – a process that would ultimately shape Bazan’s adult life.