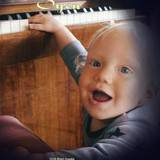 Thanks for listening to my music! If you play piano: What is your motivation to push down a key? Is it your eyes or your ears that tell you which keys to play?I learned piano on my own, playing by ear. I already played and rehearsed on guitar and bass, so the piano was just something I played to my own enjoyment. I never focused on technique and rehearsing. Just exploring, creating and getting to know the instrument. I never used piano sheets. With that approach, I learned to play songs by ear, exploring the different sounds it could create, and finding new combinations of keys that didn't used to be played together. I learned to love the instrument. I have released self written pieces, covers and songs from public domain. (I have also composed and released Norwegian children songs together with my daughter Elin Steinkjer) Best wishes Vegard Øyen Norway