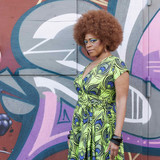 KAREN BERNOD is a Soul/Jazz singer/songwriter who has performed lead and support vocals for Chaka Khan, Mary J. Blige, Erykah Badu, D'Angelo and Incognito, among many others. It is with Incognito that Karen performed lead vocals on three tracks - "Marrakech," "More of Myself" (from "No Time Like the Future") and "Yesterday's Dreams" (from "The Best of Incognito").   Karen moved from the background to the foreground when she independently released her debut album “Some Othaness For You.” It was followed by her sophomore effort “Life @ 360 Degrees.” The album “#PlantingSeeds” came next with the EP “Four Women: Side 1” released in 2016. Karen released the singles ENDANGERED SPECIES (produced by DJ Nativeson) and