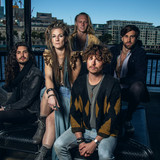 CoCo and The Butterfields

Featuring CoCo and The Butterfields

Few bands have a simple story and CoCo are no different. Established by best friends Tomas and Dulcima back in 2012, they’ve gone on to perform literally thousands of gigs, developing an enviable reputation for their exhilarating sell-out live shows as their rich and unique sound has grown and matured.

A career that has seen them perform alongside artists such as Bastille, The Fratellis, Scouting for Girls and Blue October, to BBC Radio play and their track Old Ground landing a Hollywood movie sync! Performing at prestigious venues such as London's Shepherd's bush Empire and Glastonbury festival. Establishing their own record label, fashion label and music festival, to hosting and what’s more breaking, a busking world record and somehow, finding the time to self-produce their own and ever ambitious music videos.