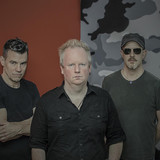 In an era of television music idols, internet video sensations and interchangeable indie bands that are about as edgy as a pair of mom jeans, Lost Romance harkens back to an earlier, simpler time. With a plug-in and play brash rock sound that is just as home with the likes of @The Replacements, @HuskerDu and @The Lemonheads as it does with Nirvana, Buffalo Tom and fellow New Brunswick, NJ natives The Smithereens and The Gaslight Anthem.   Since late 2011, LR have made a name for themselves throughout the North East as a live act to be reckoned with. Averaging close to 100 tour dates a year, the band has been winning over fans from Maine all the way to Florida with raw, honest rock n’ roll. They have shared digital space on comps with Real Estate, The Front Bottoms, Nicole Atkins, La Sera and have shared stages with King’s X,

Rye Coalition, Elliot Easton (The Cars), Clem Burke (Blondie) and The Smithereens to name a few. In addition they have also been nominated for several Hoboken Music Awards including Outstanding Male Solo and E.P. of the year.   In 2013, LR signed with Los Angeles based label, Starving Dog Records and released their debut E.P. “The Light And The Dark”. A mix of power pop, raging guitars and strong melodies, it gained ground in the press, social media and on radio. 2016 saw the release of the blistering single, "Heart On A Wire" on their own Okazia Records.   2020 will see the release of LR’s first full length album, “Strum It Again” and US tour.