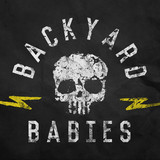 Backyard Babies was formed in 1989, in the small town of Nässjö in southern Sweden. The fact that the original guys that started the band – Peder Carlsson, Dregen, Nicke Borg and Johan Blomquist – are still playing together, is next to unique. During the past three decades, Backyard Babies has grown to become trend-setting for a whole new generation of rock bands with iconic albums such as Total 13 and Making Enemies Is Good, which both sold gold and were awarded at the Swedish Grammy Awards. Today, the band has the whole world as their ”playground”. And if their career is similar to a three course menu, the band has not even covered the main course yet. "Sliver & Gold" is Backyard Babies eighth studio album, but hardly their last. Energetic and powerful, the band prove that they're in better shape than ever and most certainly have enough material to last the coming 30 years. Discography (albums only): Diesel & Power (1994) Total 13 (1998) Making Enemies Is Good (2001) Stockholm Syndrome (2004) People Like People Like People Like Us (2006) Backyard Babies (2008) Them XX (2009) Four by Four (2015)