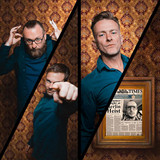 After their first 3 records LIVINGSTON completely disappeared. Fans thought that The band had retired to a quite life in the country, but they were dead wrong. The story goes that after their 3rd album, The band having always been very ambitious felt that the money in showbiz was not enough to sustain their lavish lifestyles. So they did what any self respecting group of entrepreneurs would do...turn to a life of crime. This as I’m sure you already guessed did not end well with their bank robbery spree in the US coming to an abrupt end with the arrest of all four members. Court cases ensued and later the eventual extradition back to Europe for Beukes, Jan and Phil, and the incarceration of Chris in the US. The new album “This is a Robbery”, due for release in 2020, is the embodiment of this chapter in Livingston’s life. Is this chapter fictional? Maybe. You’ll have to watch and find out.