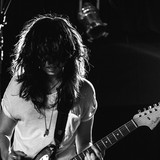 Tatiana DeMaria is a British songwriter, singer, and producer who spent the early part of her career founding and fronting the rock band TAT, producing U.K. underground hip-hop, and has now branched out in a bold new direction as a dynamic solo artist. With a passionately devoted following on both sides of the Atlantic, Tatiana channels all of her influences from alternative rock, R&B, and hip hop into an intricate blend and sound that is uniquely her own. Painting a picture with her lyrics, she draws listeners in with catchy melodies, approachable emotional depth, and raw honesty that leaves you wanting more. Her music has been featured in movies, worldwide advertising campaigns for brands like Pepsi & 7-UP, and TV shows like Gossip Girl, Pretty Little Liars, The Hills and The Real World. Tatiana is currently collaborating with an eclectic mix of producers such us LEFTI and Grammy award-winning hip-hop producer Che Pope (Kanye West, 50 Cent, Lauryn Hill) on material for her first solo album.