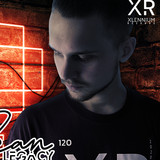 An alternative pop vocalist, songwriter, and guitarist, Sean has always experimented with and shown an interest in multiple genres, styles, and music which is what has shaped his unique and signature sound today.   Coming from Tulsa, Oklahoma, After many years of practice and experience, he began busking at a busy shopping center every weekend playing cover songs as his high school job. After years of local gigging at bars and restaurants, Sean eventually moved to Kansas where he met Shiver’s cousin on social media.   After years of consistent growth and development Shiver suggested the two form a production tandem and also an independent record label, thus Xlennium was born the brainchild of Generation X and Millennial mindsets.   However, this was more than just a record label. The two founded it with the idea of unity in mind; creating not just music, but a place where differences were welcome and where hate was not. Because of their like-minded beliefs of standing up to racism, inequality, hate, and bigotry and because of their opposite backgrounds and unlikely combination, Xlennium evolved into a mindset and lifestyle.