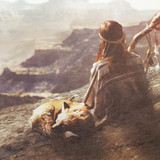 Antwerp based band Psy’Aviah brings open-minded electronic music with energy and soul. Their sound is best described as “eclectric” as they fuse several genres and into their own musical world. Experimentation is one of the main philosophies of Psy’Aviah. The band was initially founded in 2003 by producer and composer Yves Schelpe. From 2013 on the project moves away from a tradition line-up, and Yves focuses back on inviting guest vocalists and musicians into their music kicking it off with the EP "Future Past" and the 2014 album "The Xenogamous Endeavour". 2016 delivered "Seven Sorrows, Seven Stars (Deluxe Edition)" and a brand new live line-up that started perform again Fall/Winter 2016 with legendary Ben van de Cruys on guitars, songwriter & producer Yves Schelpe on keys and the famous Marieke Lightband who will certainly have a big impact on you. At the moment Psy’Aviah is working on a new full length album called "Lightflare" to be released in 2018! Experimentation is one of the main philosophies of Psy’Aviah, this is portrayed by both incorporating different genres into their own sound and by the different collaborations they have done over the years: from poetry with Suzi Q. Smith and Jean-Luc De Meyer (Front 242), to EBM power-pop with Jennifer Parkin of Ayria, trip-hop & lush warm vocals by Kyoko Baertsoen (known from Hooverphonic, Lunascape and Conjure One), covered by Chaos all Stars ft. Mona Roukachi, and even to Enya-esque reminders with Kristell Lowagie.