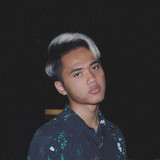 Kuala Lumpur based singer-songwriter, music producer Jason How creates consistently mellow material, breezes between mellifluous frequencies and slightly left-of-center R&B, under the name The Legacy.   Originally from Cheras, Kuala Lumpur following a creative divulgence, The Legacy managed to establish his name through his euphonious sonics and lyrics from his debut single, recyclable. This sparked a further pursuance of him to release more songs that lead to his next single, betterlove. His sophomore single gained some notice in Southeast Asia’s music scene after his song got featured in all of Spotify's New Music Friday playlists across the region.