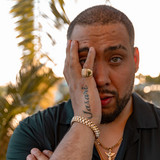 Meet Jasari, the multifaceted Puerto Rican-American indie artist – recording artist, music producer, songwriter and performer – determined to elevate the world of entertainment with his unique brand of Latin Urban music influenced by Latin urban artists such as Daddy Yankee, Nicky Jam, Don Omar and Tego Calderon. He is a self-taught music producer who began his career as a teenager producing tracks for local artists. It led him to write, rap and ultimately sing his original songs. His passion for music ignited as a child growing up in the diverse communities of Brooklyn, NY, and Plainfield, NJ, while listening to a medley of music styles from different cultures and generations, from old-school Latin salsa to disco to soul to blues. Throughout his career, Jasari has been performing to sold-out audiences while opening up shows for top urban and reggaeton artists, including Nicky Jam, J-Alvarez, J- Balvin, Alexis y Fido, De La Ghetto, Ñengo Flow, Tito El Bambino and Mozart La Para. As with all of his life's challenges, Jasari is facing the global pandemic crisis head-on. He seized it as an opportunity to get back to basics and to immerse himself in his artistry. He has been spending most of the year in the music studio with his team writing, producing and recording music, set to be released, on top music distribution channels, one single at a time starting November 2020.