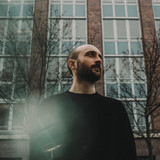 Alessandro Paganelli is a composer and guitarist based in Berlin.   Born from a musical family, Paganelli studied for over 13 years in conservatories throughout Europe while subsequently working as solo guitarist and teacher. Additionally, with his ensemble consisting of strings, piano and classical guitar, he recorded the EP Drifting, shortly followed by the EP Nebula, and a solo Album SUM. He also created music for various commissions (including Ameritz Music-Great Britain, Ostereo -Great Britain, Movement Head Quarters Ballet Company -USA, Choreographer Shannon Maynor -Berlin).   His music explores the individual’s internal search of self: “When I compose, I always search for a key to access the place wherein a bridge between the sound and the listener is created, allowing communication between the composer, the performer and the audience: a conversation that goes beyond words and enables us to feel a reflection of ourselves through sound.”   Five Movements, his most recent project in collaboration with the dancer and choreographer Shannon Maynor, will be released starting on November 12 with the first piece “Nuda Veritas”.