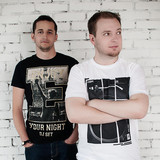 If there’s one thing Iversoon & Alex Daf know a lot about, it’s electronic music. The duo have produced and released a whole host of tracks, including the powerful 2016 track 'Poseidon’ with Orbion, and more recently the dancefloor banger ‘Anywhere Alone With You’ featuring Lil' Squishy. The pair have received support from some of the biggest EDM names such as Armin van Buuren, Afrojack, Above & Beyond, Markus Schulz, Johan Gielen, Paul van Dyk and more. In 2012, they founded their own imprint: Club Family Records. The label is an independent venture that specialises in Trance and House Music. If that wasn’t enough for the guys, they’ve toured around the world, sharing the stage with the likes of Chicane, and Cosmic Gate and between 2013-2015 held the prize of being the biggest Ukrainian radio show on KISS FM. They now have their own radio show in New York and continue on their path of Trance takeover.